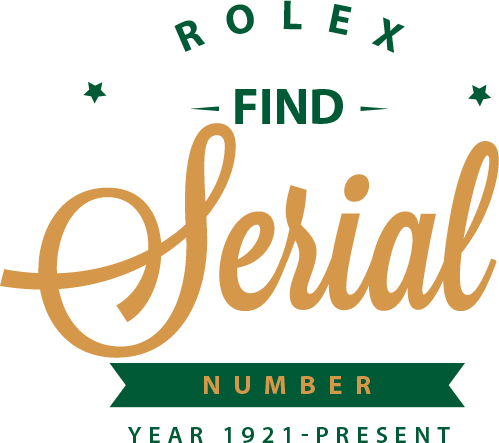 The Rolex watch has a serial number that is traditionally located at 6 o’clock between the lugs & under the bracelet.

Where is the serial number on a Rolex?

In 2005, Rolex began engraving the serial # on the rehaut (French for ‘flange’) between the dial and the crystal as well as the 6′ o’clock location. Beginning in 2008, Rolex stopped engraving the serial number at the case 6 o’clock location, using only the rehaut (French for ‘flange’) location. By 2010 this practice had gradually transitioned to all models.

In 2010, Rolex mostly stopped their conventional numbering sequence in favor for a random (aka mixed aka scrambled) serial. They will be 8 digits, opposed to 7 in the past. Random examples of these indecipherable numbers are “OT23Q257”, “12345J78”, and “345X29VN”.

* We have seen G serial watches that were produced in 2012, so Rolex is using both the mixed and the G at the same time.

* In 1987, rather than begin an 8 digit production serial, Rolex instead began their serials with a letter prefix such as R, then L, E & X. (ROLEX without the O) N, C, & S came out during the early to mid 1990’s, W, T & U a little later. The latest letter prefixes are all running concurrently…as Rolex wishes! Only Rolex knows the exact date that any watch was actually produced. Confused…contact Rolex with the exact serial number of your watch…don’t expect a reply with an answer!

* When Rolex reached the 999,999 production serial in the early 1950’s…they restarted the production serial at 100,000 rather than begin a 7 digit number at 1,000,000. During this period Rolex was also putting the date code on the inside of the case backs…so confusing production serials can sometimes have their production date determined. Look for the Roman number I, II, III or IV for the quarter & two arabic digits for the year.